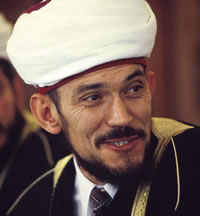 Profile: The Tatar of Kazakhstan have a population of 250,000. They are part of the Ural-Siberian people cluster. The global population of this people group is 6,223,557. Their primary language is Russian. The primary religion practiced by the Tatar is Sunni Islam, the largest branch of Islam. Sunni Muslims follow the teachings of the Qur'an and consider the first four caliphs to be the rightful successors of Muhammad. Their GSEC status is 2, which means this people group is less than 2% evangelical but there has been initial or concentrated church planting among them within the past two years.

Visit imb.org to learn more about the unreached peoples of the world, type in People Group Number: 24298 to learn about the Tatar people.

Posted by Nehemiah Teams at 4:21 AM