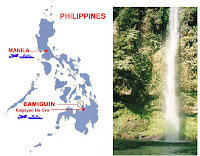 WHO are they? Camiguin Island, where many of the Cinamiguin Manabo live, has
seven volcanoes on it, including the still-active Mount Hibok Hibok. But that volcanic soil
is actually very fertile, which allows the Cinamiguin Manabo to farm all kinds of crops,
such as corn, coffee, coconuts and other fruits and veggies. The island’s volcanoes,
waterfalls and interesting diving spots make it a favorite for tourists.

WHERE do they live? The Cinamiguin Manabo live on Camiguin Island and along the
Northern coast of Mindanao.

HOW many? There are about 141,000 Cinamiguin Manabo people, and less than
1.5% of them are thought to be evangelical Christians. That’s just a little over 2,000
believers!

WHAT do they worship? Most of the Cinamiguin Manabo people put their faith in
animistic, traditional ethnic religions. These religions are a major part of not just their
spiritual lives, but their culture as well.

Posted by nehemiah teams at 8:23 AM

WHO are they? The Maguindanaon people are farmers! They farm almost all of their
own food — everything from rice to vegetables such as corn. The men work hard on
their farms, while the women and children work to take care of the home. A major
problem that the Magindanao face is called a “blood feud.” These blood feuds happen
when families or clans get into big arguments that often result in killing!

WHERE do they live? The Magindanao live on the island of Mindanao, which is
located in the Southern Philippines.

HOW many? There are about one million Maguindanaon people, but so far, only a
handful of them are believers.

WHAT do they worship? According to Maguindanaon legend, this group was
converted to Islam by a Muslim prince who came and told him he was a descendent of
Mohammad. Legend has it that he also married a local woman who is said to have been
born from a stalk of bamboo!

Today, the Magindanao are the largest group of Muslim Filipinos, but their belief system
is considered to be more “folk Islam” than orthodox Islam. That means that their Islamic
practices are mixed in with their animistic beliefs. Animistic refers to their belief that
inanimate objects have spirits.

PRAYER needs: Though the Magindanao don’t practice the strictest form of Islam, any
kind of Islam is hard to penetrate. So far, only a few portions of the Bible have been
translated into their language. And though there are some Christian radio and television
broadcasts available for them, there has been little response.
• Ask the Lord to call out people who are willing to go to the Philippines and share
Christ with the Magindanawo
• Ask the Lord to raise up a group of qualified linguists to translate the Bible into
their language.
• Ask God to soften and prepare the hearts of the Magindanao for the Gospel.
• Pray that the small number of Magindanao believers would be encouraged,
strengthened, protected—and increased!
• Ask the Holy Spirit to give the missions agencies creative ideas that will help
them reach the Muslim Magindanao with the good news of Jesus.

Posted by nehemiah teams at 8:18 AM