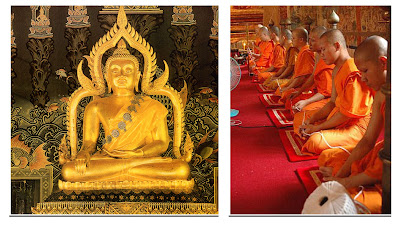 WHO are they? Among the Thai people, there is almost no division of labor by gender.
That means both men and women pitch in to do the fishing, cooking, tilling, taking care
of babies, cleaning the home and washing clothes.
The actual lifestyle of the Thai people varies a great deal, depending on people’s
occupation. From rural farmers to merchants to the clergy, there are many differences
among Thai people. The wealthiest Thai live in very nice houses with plank floors and
tile roofs, while the poorest villagers live in bamboo homes with thatched roofs and dirt
floors. There are many health problems in Thailand. Hepatitis, Malaria, and HIV are common.

WHERE do they live? The Thai live throughout Thailand.

HOW many? There are about 60 million Thai people.

WHAT do they worship? The main religion of Thai people is Theravada Buddhism.
Almost all are devout followers of Buddha, who is considered “the enlightened one.”
That means that they seek to eliminate suffering and improve their own future by
earning merit in the pursuit of what they call perfect peace. They try to earn merit by
doing all kinds of things – feeding monks, donating to temples and attending worship
services. The Thai also sometimes incorporate their Buddhist beliefs with folk animism,
which means they seek help by worshipping spirits and objects.

PRAYER needs:
• Pray that God would raise up workers to work among the Thai people.
• Pray that as missionaries share, God would give them the words to say to help
the Thai understand the Gospel.
• Pray that as workers help with the Thai’s physical needs that doors would be
opened to the Gospel.
Posted by nehemiah teams at 9:05 AM

AOT is in session.

WHO IS AOT FOR?
AOT is an advanced training for former NT participants.

WHEN IS AOT taking place?
AOT is in session now. If you are interested in taking part in this training next year please email Nehemiah Teams. Time, place, and price to be announced later.

At NT AOT you will learn...
·       How to hear from God and know His will
·       How to live a life that glorifies God.  You will study in-depth ten topics based on the ten gates of Nehemiah 3: Salvation, Witnessing,  Learning from the past,  Trials, growth, and humility, Confession, Holy Spirit, God’s Word, Spiritual Warfare, The Second Coming, and the Final Judgments

Stay tuned for more information on AOT and how you can be praying for the AOT 2012 participants.
Posted by nehemiah teams at 5:55 AM 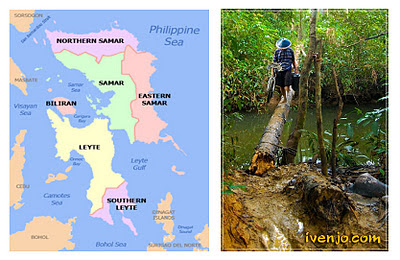 WHO are they? The word Waray Waray means nothing. And that is what they have—
nothing. Many earn a meager living as farmers, harvesting architectural products like
coconut, rice, corn, white sugarcane and tobacco. The Waray Waray also have several
traditions that can be traced back to pre-colonial times. For example, the Kuratsa dance
is a popular traditional dance that the Waray-Waray often perform at many social
gatherings, especially weddings. The couple dancing the Kuratsa is showered with
money by the people around them. The belief is that the more money is showered upon
them, the more blessings will come their way.

WHERE do they live? The Waray Waray reside on Eastern Samar and Leyte.

HOW many? There are about 3,375,000 Waray people, and less than 2% of them are
estimated to be evangelical Christians. Some churches have been planted among the
Waray Waray, but there is still a great harvest that has yet to be reaped!

WHAT do they worship? The vast majority of Waray-Waray people are Roman
Catholic. They take their religion very seriously and celebrate many saint-focused
holidays.

LEARN more: Watch a video filled with photos of a mission team’s recent work among
the Waray Waray.
Posted by nehemiah teams at 9:03 AM

Prayer support is important, but sometimes creativity is the hardest part of getting others involved. Well, when you don't have a good idea of your own, it might be a good idea to see what other people have done in the past. That way, you can flatter them through imitation while putting your own twist on it- and get people praying for you and/or your team.

Here are some ideas that I have found that I think could be done easily, and really help you build a support of prayer warriors.

Get people excited before you go. (And remind them that they are going.) When you are excited about something, it is natural to talk about it.


A countdown on a social media is a great way to get people's attention.
And to remind them that you are going. 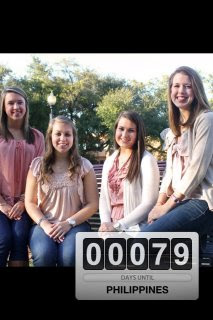 Post a video of yourself...tell people who you are, what you will be doing, and share specific ways for them to be praying for you. 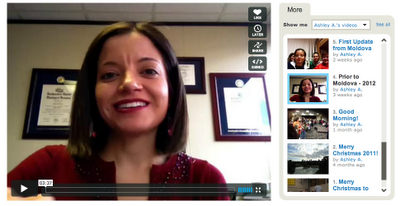 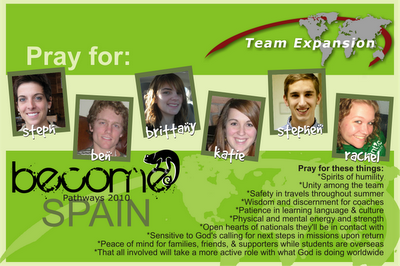 Make a team powerpoint slide to run during the announcements at your church and churches in your area. 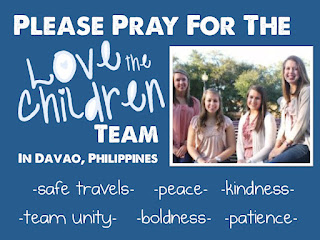 If you thought of something different or found a great idea to share let us know!

Posted by nehemiah teams at 9:27 AM