WHO are they? Most Balinese live in very close knit villages with strong family, social,
religious and economic interrelationships. Much of the village's interactions are centered
on Hindu worship in the temples and agricultural cooperatives in the surrounding fields.
The Balinese' main livelihood is rice farming. The Balinese are known throughout the
world for their artistic abilities. Many Balinese villages specialize in one particular form
of art. Their artistic talents can be seen in the variety of their paintings, carvings,
sculpting, dancing, and weavings.

WHERE do they live? The island of Bali is probably better known than the country of
Indonesia. The word "Bali" brings to mind visions of a tropical paradise. Its beauty,
friendly people, exquisite art and unique dance have made Bali a favorite destination for
millions of tourists from around the world. On this "Island of the gods" reside the
Balinese. However, many Balinese can also be found on the nearby island of Lombok,
as well as in Lampung, Sulawesi, South Kalimantan, Sumbawa and Papua.

WHAT do they worship? Hinduism is the primary religion of the Balinese. Even
though Hinduism has greatly affected the culture, the Balinese have managed to
maintain their original culture, so that Balinese Hinduism differs from Indian Hinduism.
Balinese Hindus believe that there is one god that can be explained by the Trimurti, a
concept of three aspects of God: Brahma, the creator; Vishnu, the protector; and Shiva,
the destroyer. Both individual families and larger assemblies use this shrine to offer
food and flowers to their gods.

Posted by nehemiah teams at 9:33 AM

WHO are they? The Bajau have traditionally been known as sea-nomads, involved in
extensive maritime trading and dwelling in boats. However, the great majority of Bajau
are now house dwellers. While some such Bajau continue to derive their livelihood
primarily from the sea, others have adopted an agrarian way of life.
WHERE do they live? Currently the West Coast Bajau are spread along Sabah's
coastal regions from Kuala Penyu in the southwest as far as Terusan, east of Pitas.
They live primarily in the Kota Belud, Kawang, Papar, Tuaran, Banggi, and Putatan
areas. The Kota Belud District, on the Tempasuk plain about halfway between Kota
Kinabalu and Kudat, contains the largest grouping of West Coast Bajau in Sabah. Kota
Belud is the cultural heartland of the West Coast Bajau.

WHAT do they worship? The traditional belief system of the West Coast Bajau people
is animistic in nature; a variety of spiritual beings interact with human beings both
positively and negatively. For example, people are discouraged from going out on foot
alone at night owing to the presence of spirits of the dead, or ghoulish creatures that
seek to eat babies or the flesh of recently deceased people. Traditional beliefs interact
in complex ways with Islamic beliefs (the more current system). Most people subscribe
to a variety of both traditional and more current beliefs, and it is difficult if not impossible
to separate them. Various superstitious beliefs from former times still have some
prevalence among the West Coast Bajau.

Posted by nehemiah teams at 9:31 AM

Washing Your Clothes By Hand! Get Excited! 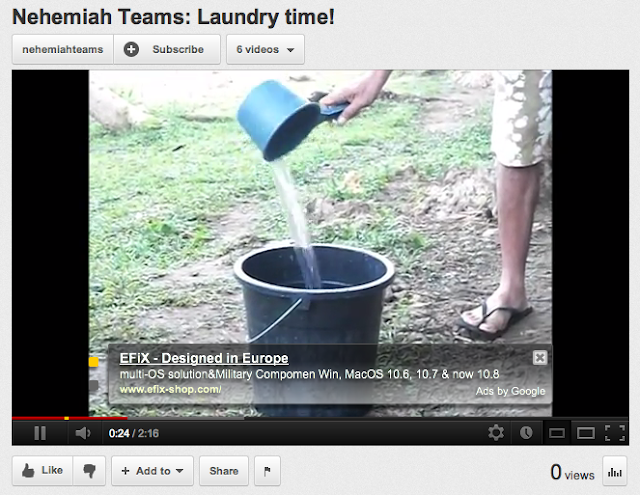 Posted by nehemiah teams at 5:26 AM