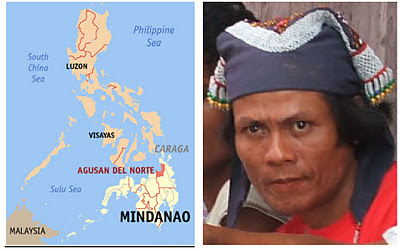 WHO are they? The Agusan Manobo are one of eight Manobo people groups in the
Philippines. The eight groups have lots of things in common – a common cultural
language and a heritage that can be traced back to the early Malay people from
Southeast Asia. But there are differences too! Each group lives in a different region,
which means each group has developed its own survival techniques and cultural
traditions based on the unique place where they live. In the Agusan culture, polygomy
(having more than one wife at a time) is common—if a man is wealthy enough. Many
have not had the opportunity to learn about God’s design for marriage, which is
between one man and one woman.

WHERE do they live? All eight Manobo groups live on Mindanao, the Philippines’
largest island. The Agusan Manobo lives near the Agusan River Valley, which is where
they got their name. The word “Agusan” means “water flows,” and they live near the
river.

HOW many? There are about 65,000 Agusan Manobo living in the Philippines today,
and around 15% are thought to be evangelical Christian. While this percentage is higher
than many of the other groups we have studied, that still leaves around 55,250 Agusan
Manobo people who need to be introduced to Jesus Christ our Savior!

WHAT do they worship? The Agusan Manobo believe in many unseen spirits that
interfere in the lives of humans and one “great spirit” that created them.

PRAYER needs: The Agusan Manobo people have many physical and spiritual needs.
• Their farming techniques are currently very primitive, and training would not only
help them harvest more, but it would also give missionaries an opportunity to
enter their communities. Pray that God would call missionaries with farming
know-how to come minister to the Manobo people in this way.
• The numerous dialects and language of this group makes it hard for outsiders
such as missionaries to learn their language! Pray that God would help
missionaries to learn quickly so that the Gospel can be clearly shared.
• Pray against the powers of darkness that are blinding the Manobo from
worshipping the one true God.
Posted by nehemiah teams at 8:46 AM